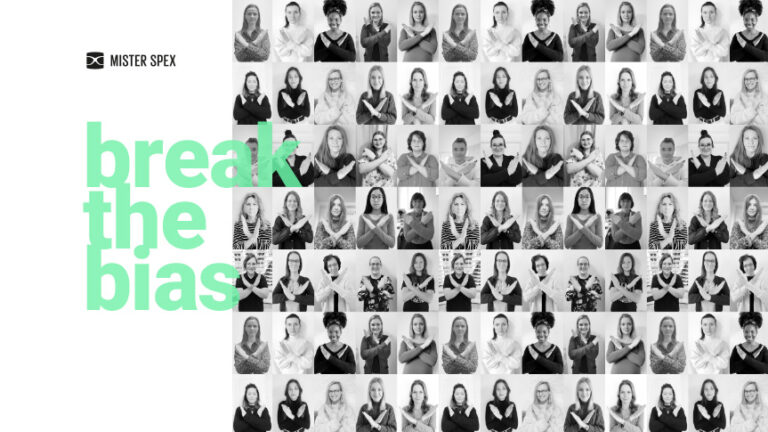 On the 8th of March, on International Women’s Day, the focus is on the role of women in society in order to draw attention to equal rights and women’s rights. We still live in structures that disadvantage women: Women take on a large part of the unpaid child-rearing and care work, and are paid less than men for the same work. In addition, every third woman in Germany is a victim of physical and/or sexual violence at least once in her life. Women need equal rights, they need equal opportunities, equal wages, non-violent relationships as well as fair working conditions.

This year, the 111th International Women’s Day is themed “Break the bias”. It calls for creating a world free of stereotypes, prejudice and discrimination that is diverse, equal and appreciative of differences.

At Mister Spex, we took up the theme and used International Women’s Day as an opportunity to discuss equality, discrimination, stereotyping and prejudice in the workplace. We put strong women at Mister Spex in the spotlight of two panel discussions – one in German and one in English.

Maren Kroll, Chief Human Resources Officer at Mister Spex, opened the events with an appeal to the participants: “At Mister Spex, we believe that we can only deal with our preconceptions about others if we are willing to learn and put our own patterns to the test. Let’s learn together by actively listening. This is the only way we can continuously live a more diverse culture at Mister Spex. This is the responsibility of every employee in our company.” And so we listened intently to the courageous speakers as they recounted discriminatory experiences and described situations in which they were treated unequally and exposed to stereotypical thinking. “In such situations, it is important that we stand up for each other, be courageous and say: ‘That was wrong’. Because that’s the only way we break prejudice and unequal treatment,” said one speaker during the panel discussion. But it also became clear that we already live in a very progressive environment, because not all participants experienced exclusion or discrimination based on their gender.

In answering the question of what Mister Spex as a company and the staff can do concretely for more equal treatment, the participants agreed: “We want to encourage and empower each other, continue to promote exchange on the topic of equality and women’s rights, provide thought-provoking impulses and actively question ourselves. Because we all think in stereotypes and pigeonholes. “That’s basically fine at first, because the world is very complex and we have to simplify it in order to understand it. It becomes problematic when we lump everyone together and don’t question the stereotyped thinking,” said one colleague, and received the agreement of all participants. In the end, it is about standing up against patriarchal structures so that all people have the same opportunities. No matter what gender, skin colour, religion or origin they have. And we must all continue to stand up for this (not only on 8 March).

Recommended literature from the team:

What are you searching?

On our news blog, we take you behind the scenes and into the world of Mister Spex. Whether it’s new stores, portraits of colleagues, new collections, or exciting facts and figures from the world of ophthalmic optics: here you’ll get to know Mister Spex from different angles and get exciting insights.

We are looking forward to your feedback!